This Wiki is best viewed in Firefox with Adblock plus extension.

This report is based on the findings of an ongoing plagiarism analysis (date: 12-01-2014). It is therefore no conclusive report and it is recommended to visit the page http://de.vroniplag.wikia.com/wiki/Nm2 for newer findings and further information.

A critical discussion of the publication by Nasrullah Memon, David L. Hicks, and Henrik Legind Larsen: How Investigative Data Mining Can Help Intelligence Agencies to Discover Dependence of Nodes in Terrorist Networks

The following chart illustrates the amount and the distribution of the findings of text parallels. The colours show the type of plagiarism diagnosed: 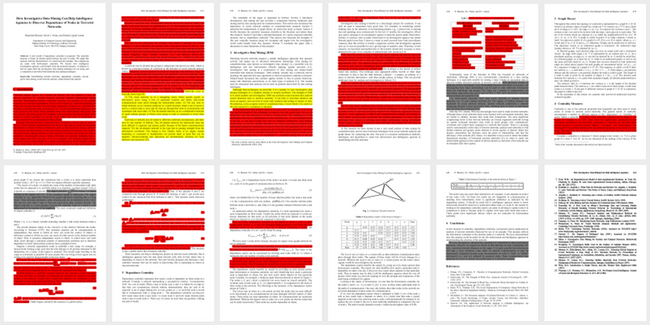 Most of the text of the paper has been recycled by the authors elsewhere:

Remark on the colouring

The colouring is automatically generated and shows text parallels. Its purpose is to facilitate the orientation of the reader, it does not, however, automatically diagnose plagiarism of any kind. In order to form a judgement about a certain text parallel one should consult the text itself.

Remark on the line numbering

When identifying a fragment with line numbers everything that contains text (except for the page header and/or footer) is counted, including headings. Usually charts, tables etc. including their captions are not counted, however.